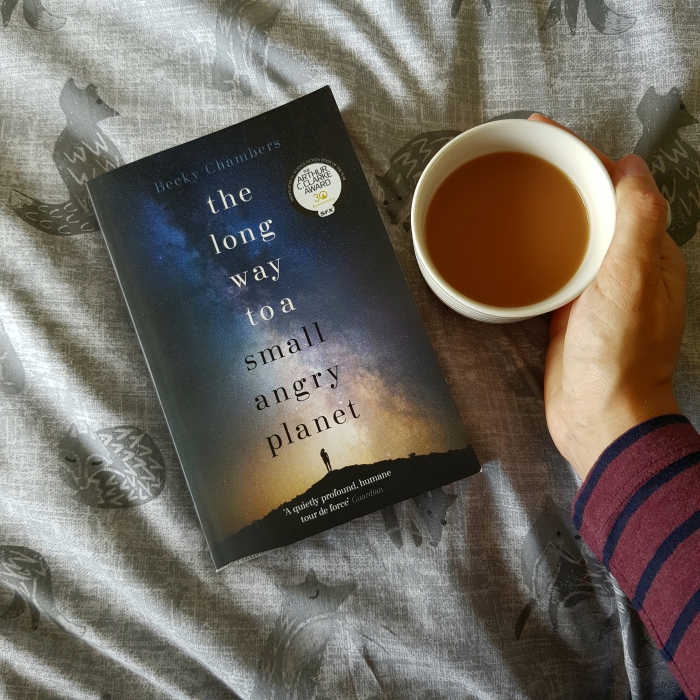 The Long Way to A Small Angry Planet is set in our galaxy but far in the future, when other planets have been colonized and various other sentient species have invited humans to join the Galactic Commons.

The story follows the crew of a ship called the Wayfarer, who make their way in the galaxy by creating hyperspace tunnels that allow other ships to travel from one planet to another. Perpetually struggling to make ends meet, the crew accept a high-risk, high reward job to connect a planet inhabited by a belligerent race of aliens who have only recently ceased sending messengers and ambassadors from other planets home in bits and begun communicating and trading with the Galactic Commons instead.

The Long Way to A Small Angry Planet is a slice-of-life space-opera, and it’s hard to describe the plot because not much actually happens yet is far from slow or boring. The Wayfarer’s crew is made up a multi-species cast, and the human, alien and A.I. characters are all vividly realised, and their relationships allow the story to explore the romances, taboos, prejudices and politics that would invariably exist between so many different species. The writing is also deliciously atmospheric, and right from the offset I felt like I was on board the Wayfarer, and could hear every clunk in the ship, the hum of the engine and imagine staring out of the viewport into endless space.

I don’t read much science-fiction but I’m so glad I took a chance on this, and I look forward to reading the rest in the series. Have a lovely week! X