The story begins in Cairo where a young woman called Nahri is working as a thief and con-artist, though she dreams of becoming a physician. During a ceremony to exorcise a demon possessing a young girl, she accidentally summons a warrior Djinn (or rather a Daeva) called Dara, and is pulled into a world of flying carpets, mythical beasts and simmering tensions between the different races of Ifrit, Djinn, Daeva and half-human Shafit. One of the things I loved most about The City of Brass was that it drew from Arabian folklore and mythology which was such a refreshing contrast to the countless medieval European inspired fantasy stories that dominate the genre.

The narrative switches between two perspectives, Nahri, and Ali, a Djinn Prince in the city of Daevabad. The three main characters, Nahri, Dara and Ali are all flawed and victims of circumstance in their own way: Independent and used to fending for herself, Nahri finds herself caught between feuding factions all plotting her future with little consideration for what she wants; Dara was enslaved by the Ifrit to serve human masters and is weighed down by the guilt and shame of all the lives he’s taken and the things he did while enthralled; while Ali – as the second son of King Ghassan – has been trained as a warrior, when he longs to become a scholar and end the injustice and hypocrisy he witnesses. 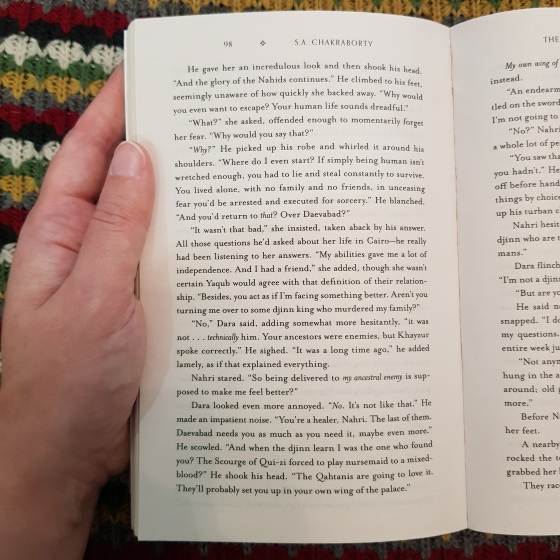 The City of Brass is probably the best book I’ve read this year, though it’s not perfect as there are some pacing issues and a few slightly predictable twists, but I was still captivated by this tense, political and character-driven drama as Nahri and Ali discover just how ruthless King Ghassan is and how far he has gone to hold on to his throne and maintain order in the city of Daevabad. This is the first book in The Daevabad Trilogy and I’m looking forward to finding what happens next. Have a lovely week. X

4 thoughts on “The City of Brass by S.A. Chakraborty”