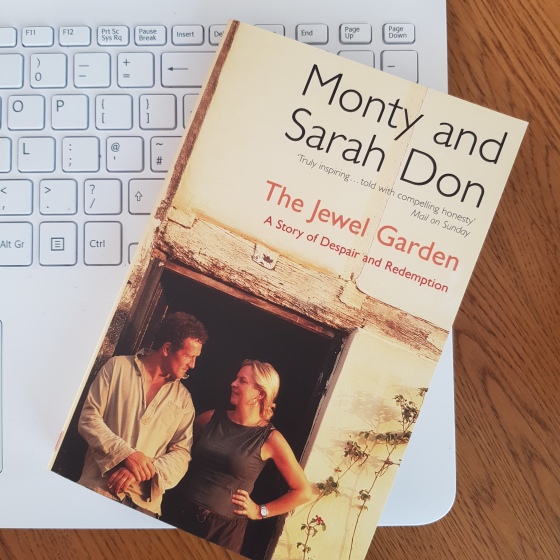 March is an unpredictable and changeable month in our part of the world, today we’ve had snow, sunshine and hail stones, and it’ll be a while yet until we can risk sowing any seeds in the garden, but a good friend and fellow urban gardener gave me a copy of this to read to tide me over.

Perhaps because I’ve only relatively recently fallen in love with gardening, I didn’t really know much about Monty (or Montagu as he prefers) Don, and found this to be a fascinating insight into his life. The Jewel Garden initially follows a fairly typical rags-to-riches trajectory as Monty and Sarah describe being newly married and desperately poor when they decide to start a jewellery making business together in 1981; coinciding with the glamour and extravagance of the 1980s, their jewellery became an international success. Yet by 1989, their good fortune seemed to have run out as the business was struggling, they were on the verge of bankruptcy, Sarah had a slipped disc and Monty was sinking into a depression.

Monty writes openly and honestly about this period in their life, the apathy and lethargy, fatigue and restlessness, and the overwhelming sense of hopelessness he felt. Although Monty recognises the role that anti-depressants and a course of Cognitive Behavioural Therapy played in his recovery, he also extols the virtues of gardening which combines fresh air and natural light with gentle exercise, a sense of purpose and productivity.

The second half of the book focuses on the design and cultivation of the gardens at their current home, Longmeadow, including the stunning Jewel Garden, which was a reminder of their past but also symbolized rebirth and change. Their writing beautifully captures all the excitement of creating a border or garden from scratch, and all the creativity and experimentation that goes on behind the scenes. My only real criticism is that the gardens are vividly described but I’d have liked to see more photos, and at times it read like a list of every flower and plant in their garden.

I found The Jewel Garden to be an inspiring, moving and thoroughly entertaining read that left me itching to get back out into my own little garden. Have a lovely week! X

10 thoughts on “The Jewel Garden by Monty & Sarah Don”