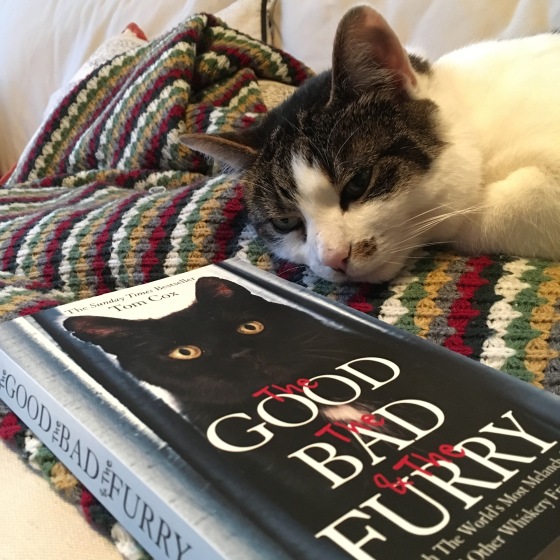 I had been vaguely aware of Tom Cox and his cats on twitter, but I only stumbled upon his books recently while looking for A Street Cat Named Bob by James Bowen (reviewed here). The Good, The Bad and The Furry follows roughly a year in the life of Tom Cox and his cats starting at the end of his nine year relationship with his wife and explaining the difficulty of reaching a custody arrangement for the couple’s six cats, his grief following one of his cat’s deaths, a new relationship and eventually a new kitten.

Tom vividly describes his relationships and family, his own beloved cats and other wildlife (including a toad living in his dad’s shoe) he meets along the way. There is considerable anthropomorphism throughout the book as Tom tries to convey his cats’ personalities and quirks, and the animals are every bit as memorable as the people.

I chuckled aloud at so many points during this book, and could relate to Tom’s descriptions of life with cats from the conversations he has with them (“It’s a carrot, you wouldn’t like it”) to his anxiety and sorrow when any of his cats are unwell. I was also moved by his realisation about just how much of his identity and history is tied up with his furry friends.

It seems somewhat unfair to compare The Good, The Bad and The Furry to A Street Cat Named Bob as they are very different books, one written by a middle class journalist with four cats living in Norfolk and the other by a recovering addict in London who takes in a stray cat, yet they are both aimed at a similar demographic sitting side by side on the bookshop shelf. Both books are autobiographical, but differ in tone and content, yet both writers are equally devoted to their feline companions, and they share similar insights into the comforting sense of purpose and routine that caring for pets provides during all the ups and downs of life.

After a hectic week that included taking my cat to see an oncologist and my husband to A&E along with hosting family and friends at home, The Good, The Bad and The Furry was an easy to read and often amusing book I could dip into during the rare quiet moments I had to myself.

4 thoughts on “Review of ‘The Good, The Bad and The Furry’ by Tom Cox”