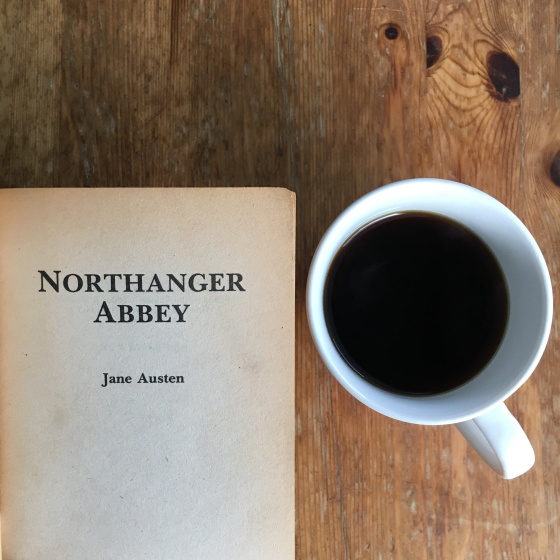 I feel unworthy of reviewing Jane Austen as I’m embarrassed to admit that until now I had only read one of her novels (Persuasion at school) but determined to fill in some of the more obvious gaps in my literary knowledge, I picked up a copy of Northanger Abbey.

Northanger Abbey was the first novel Jane Austen completed, but it languished with a publisher for over a decade before being returned to the author, and sadly it was published just a few months after her dealth.

Northanger Abbey follows Catherine Morland, an unlikely but likeable heroine with a weakness for gothic horror novels such as Ann Radcliffe’s Mysteries of Udopho. The plot trots along, though Northanger Abbey itself doesn’t feature until halfway through the story. The first half of the novel is set in Bath where Catherine meets her charming and witty hero, Henry Tilney, and the antagonists, Isabella and John Thorpe, before she is invited to visit the Tilney family’s home, Northanger Abbey.

I won’t give too much away, Northanger Abbey is not the haunted, gothic ruin that Catherine expects but that doesn’t stop her imagination from getting the better of her, and Austen creates an air of mystery and suspense during parts of the story.

This is a novel that doesn’t take itself too seriously, it’s satirical and unpretentious, but still manages to elicit sympathy for the characters when misfortunes befall them. If this novel has a fault, it is that Catherine is too sweet-natured, naïve and forgiving, while the antagonists are in contrast too selfish, conceited and devious.

Northanger Abbey seems to be often overlooked compared to Austen’s other novels but it’s easy to read and thoroughly enjoyable. I thought it was perfect reading material for a cosy night in and a lovely introduction to Jane Austen’s works.